Shuddersome evidence paints a picture of a deliberate pogrom at six involved centers during the December military massacre in Nigeria’s Zaria.

The 1000+ estimated victims massacre has been described as one of the worst single-event atrocities in Nigeria and perhaps the world since 911, second only to the Baga 2500 Boko Haram genocide of January the same 2015.

Through December 12th to the 14th, following a blockage of the road of the military chief, Tukur Yusuf Buratai by rebellious members of the Islamic Movement ahead of their annual flag-hoisting celebration at the Hussainiyah Baqiyatullah center in Zaria, a full military deadly raid at the six centers killed at least 350 persons and as many as 1000 by estimates of the unaccounted for.

Lt. General Tukur Yusuf Buratai, Nigeria’s Chief of Army Staff who was involved in the incident alleged that he narrowly escaped assassination by Islamic Movement youth on a “mission to kill him.” There was no mention of why they would want to do such a thing to him if indeed it was so.

A video clip was released that showed the angry Shia Muslims arguing with Buratai’s men. Pictures also showed the youth with sticks, catapults and some swords, ready to fight a suicidal battle. Later, images were shown and a story told of how the leader of as many as 10 million “Shia” Muslim followers was captured hiding in a bathroom at his house during the deadly military pogrom. Again left out was the reason Zakzaki was hiding.

Pictures showed burning tyres, a sign of protest, but no explanation has been given as to what they were protesting for and why they were suddenly so angry. The typical Islamic movement processions that occupy roads have historically never been accompanied by burning tyres and the like.

In the afternoon of December 12th, at about 12 noon, the Islamic Movement were prepared to celebrate their after-Muharam special Maulud month occasion. As they do the same time each year, they had changed their most Holy house, the Hussayniyah Baitullah Islamic Center flag from Gray to Red.

As they prepared for an occasion which we have the video of the same event last year that showed military vehicles plying the road during it, soldiers with tanks and armored vehicles suddenly arrived according to eye-witness testimonies.

Ahead of the evening massacre, soldiers had been reportedly deployed and entered formation surrounding the Islamic Center on Sokoto road. There was no road block at this time, there was no provocation and no attempt on the life of General Buratai, who by the way, I believe is meant to be based with the Military command in Maiduguri, not so? We have seen the videos from the soldiers surrounding the center and laying on the ground with guns pointed at the center ready to attack. As narrated by victims who lost loved ones, some said the soldiers opened fire on the Islamic Center, killing 7 faithfuls and wounding several others. This was the first account…that the Nigerian army had killed 7 Shiites. Till date, the army chief has only admitted killing the 7.

Other accounts including the official release on the Islamic Movement website have it that the soldiers were only confronted and asked why they were provocatively stationed around the Holy center, to which the Army responded that they were there to protect their leader from possible attack by the movement. This was surprising? Perhaps there is some intel of “intent” not yet released to the public.

Next, according to the Islamic Movement, their members successfully drove the army off from their frontage and they re-assembled not too far, at the PHCN yard opposite Post Office junction.

Lt. General Buratai and his men were plying the Sokoto road in the direction of the Islamic Center towards their function. But by this time many members of the Islamic movement who had heard of the provocative posture of the Nigerian Army at the Islamic Center had recognized that a massacre was eminent. They knew the ominous signs of one from recent experiences. In an identical episode, in July the previous year (2014) the Nigerian Army had massacred dozens of Islamic movement members including three sons of their leader; and nothing had been done towards justice. In the 2014 attack, many of those killed including the Sheikh’s three sons were taken alive and exterminated in cold blood by Nigerian soldiers.

The youth blocking the road were apparently suicidal. Their mantra appeared to be, it is better to die brave on your feet than to be killed cowering. They are said to have a covenant never ‘again’ to retreat in the face of an enemy. They were going to defend the Islamic Center from what they suspected and rightfully so, was going to be a wave of murderous attacks, or ‘happily’ die trying. We have seen the pictures of them armed and denying the military passage toward the center.

The evidence in the sliced video released by the military side shows a heated verbal confrontation.

The Shia Muslims were saying, “And today that’s how you brought soldiers to Hussainiya…” “We may just as well die here.” And the Military men (spokesman) with General Buratai as can be heard from the video said, “Wallahi Bamusani ba,” meaning, “I swear to God we did not know.” The Shiites also complained about two of their members who were also killed in Jos village, Zaria the day before.

“But today you brought soldiers to the door of Hussainiyyah…without any warrant/reason, every action you are taking, you used to inform people.”

The rest is history. There were no witnesses alive to tell the story. At least 172 corpses were reportedly deposited at the ABU hospital alone. Later the Kaduna state government confessed that the army brought another set of bodies making a total of 347 bodies that were secretly buried at Mando cemetery in Zaria. 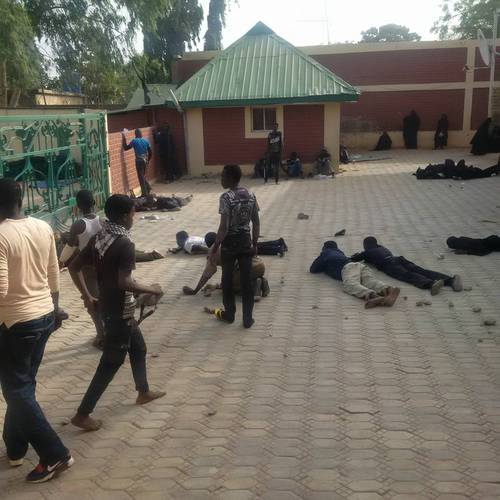 Some estimate that as many as 1000 members who came to “protect” their beliefs and those they hold dear, were killed. These videos are the last captures of these youth alive, many, students in ABU. This video shows how much the life of Buratai was at risk as the military walked freely within the ranks of angry youth. Perhaps one of them threw a stone.  The video was cut to cover the part where the massacre started at that point on Sokoto road. We have seen images of similar non-Shia riotous youth in Nigeria’s north, armed with sticks and daggers and NEVER have we heard of the military called in tho mow them all down as happened to these Shia Muslims. The after-math of the 2011 elections is a similar case fresh in our memories, where the government did not order a massacre of armed, civil disobedient youth.

In what bore the hallmarks of a vendetta, the army continued on to Hussainiyah Islamic Center and killed everyone they could there. They destroyed the building. They then went on to Sheikh Zakzaky’s house at about 11pm that fateful night. We are not sure if they had an arrest warrant and if it was their duty to continue this military attack or if this should have been the duty of the Nigerian police. We do not recollect Marshal law or a State of Emergency being declared in Kaduna those fateful days.

There was no standoff and none of the typical hours of negotiations where many civilians, women and children are involved as seen in civilized nations; it was a raid and destroy mission. We have no reports of evidence of immediate risk and the need for sweeping military or police action on the various religious and residential buildings. The Nigerian army fired shots into the house killing the many in there who would rather die than leave their leaders. As more members poured in as a human shield, the army happily delivered death to them.

They then burned down Sheikh Zakzaky’s house, burning whoever was still alive inside it. They threw grenades and used bulldozers in full, deadly wartime military action. From their actions, they had hoped to kill Sheikh Zakzaky as they obliterated his home. Many died including three more of his sons. The army later found the leader who had sustained about four shots, hiding, saved from their extermination attempt on his residence. His surviving daughter, Suhaila said:

“We understand that the Nigerian soldiers are trying to cover and hide these atrocities, because they are afraid of what it will result to, as they rethink after the massacre. Surely, the Nigerian army killed my three younger brothers; Hammad and Humaid who they shot on their forehead, surely they have been killed.

“However they shot my mother in her stomach and leg, and god’s willing, it was not too hard on her, because even after she was shot, she still walked with the bullet (in her leg and stomach). Before we left the place, they beat her up (our mother), at the time we were with some of the sisters. The sisters that we were together, the soldiers all pulled their veils, and they all beat us. After all, they took us from our house to Barracks, and then disunited us with Shaikh Zakzaky.” Read more of this account From his appearance with swollen eyes dripping blood, it appears Sheikh Zakzaky had been severely tortured. They pulled him by the legs and pushed him on his behind on the ground as pictures hint; they then loaded him into a wheelbarrow to transport him.

A video released by the “academic unit” of the Islamic movement has hard-to-watch footage of the army patiently surrounding the Husainiyyah Baqiyatullah Islamic center’s entire perimeter.

In the 22 minute video, soldiers who are not taking fire are seen being carefully positioned in combat formation every 3 meters along the entire hundreds of meters perimetry. This arrangement is to ensure that “no one leaves alive.” The hundreds of deployed soldiers are all put to lie down and point their barrels at the Islamic center.

What could prompt such battle-mode arrangement ahead of the pogrom is left to be imagined. Even when Jesus’ armed disciple cut off an ear of Malchus sent by the high priest, a massacre of all disciples was not the decerebrate response.

Throughout the video there is no form of armed reaction from the Islamic center who are seen cowering in fear and praying to God.

According to a dead victim, Muhammadu Bukhari who died in the early hours of the 13th, the soldiers shot volleys into the center at every moving being all night and then bombed down the fence at about 3 am before coming on to finish off every man, woman and child within; and then they demolished. Late Muhammadu Bukhari’s last message was at 4.27am.

According to Human Rights Watch, over 300 bodies were buried by the army in mass graves to “cover-up” the pogrom. Hundreds of other bodies of these mostly students killed were deposited in the ABU hospital center.

Estimates put those killed at over 1000. Hundreds more were detained and several kept to die in detention, denied of medical attention. There are accompanying allegations of rape and there is also video and picture evidence of wide spread demolitions by the army and Kaduna state government at over four centers unrelated to the initial incident continued over the next days. Allegations also include open execution and burning alive of several arrested victims including sons of leader Zakzaky.

Sheikh Zakzaky and his wife Zeenat were held in an unknown location for three months after the massacre denied visitation. They have since been held for over 200 days without charge.

The State security department recently submitted to court that they are forcefully detaining Zakzaky and his wife for their own protection.

As at July ending, 228 days since the massacre, the Mando mass grave is yet to be declared a rime scene and the bodies yet to be exhumed for proper investigation and identification.